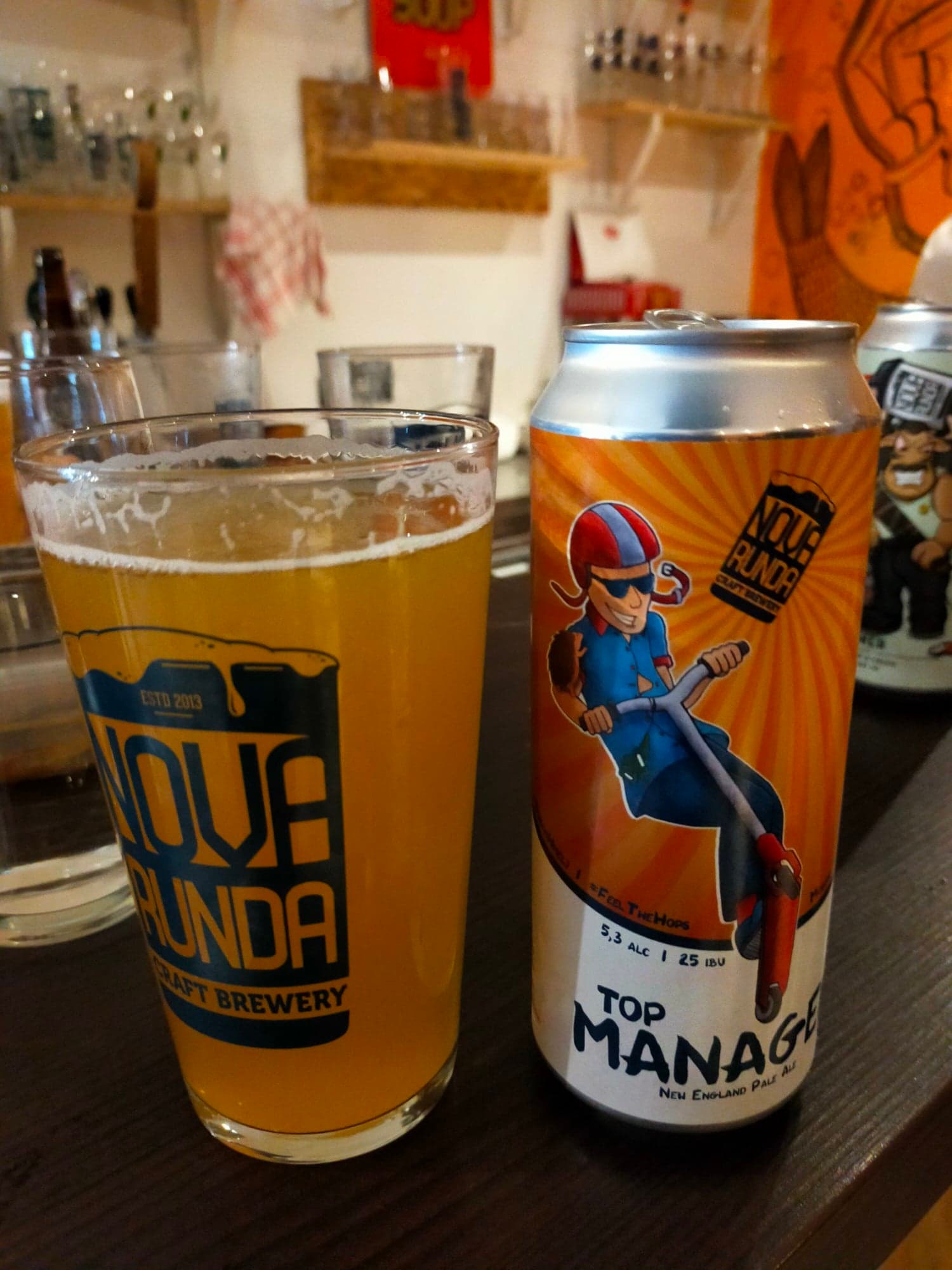 I´ve been on a little trip to Europe for the few past months so I decided to write a bit about the current craft beer scene in Europe. I will write a few different articles and this is the first and shortest one. Croatia was so filled with tourists during this time of the year so I quickly headed to Hungary. No Plitvice Lakes this time either, as it would have been way too difficult to arrange it. There would also have been thousands of other people, so I will try again during low season sometimes.

How is the craft beer scene in the Balkans

Craft beer in the Balkans in generally alive and well. Throughout the years, when I´ve been travelling the region, Serbia and Croatia seem to be the standout countries in this field. Other countries like for example North Macedonia is more of a wine country. Although there is craft beer also in Bosnia it´s maybe not worth a trip there only for beer. THe good things there are plenty of cool things to see in Bosnia so you can always go there for sightseeing. A few years ago I met an American that produced craft beer in Trebinje, OZ Craft Pivo, but unfortunately he closed.

Anyways, let´s start with my little story I wrote down while drinking throughout some of the best craft beer bars in Croatia.

I arrived in Zadar pretty late on a Friday night. I thought I would still have had a chance to drink some craft beer but the places were closed. I had looked up two Zadar craft beer bars but unfortunately, they were closed. The places were Brlog Pivovara and Pub “Dobra Ćakula” – Varoška Pivovara. The next morning I tried to go again to see if they would have opened in the morning by any chance, but unfortunately, no luck at 10 am.

Instead, I found a cozy little bar called Backyard Bar. It´s not a craft beer bar but they have a selection of Croatian craft beers. I had a Pale Ale from Zmajska Pivovara and a funnily named IPA called Fakin IPA from Pivovara Medvegrad. That´s where I realized this bar doesn´t focus much on craft beer as the waitress got a bit shocked when I asked for a ”Fakin IPA”. Some laughs later I got the beer. None of them were spectacular but totally drinkable. They were 23 Kuna each which is around 3$.

The place is playing some nice old rock classics but they could definitely skip the Bryan Adams.

In general, it doesn´t seem like Zadar is the best place to travel for craft beer. However, if you want craft beer in Zadar you have a few options.

I left Zadar pretty quickly. It looks like a decent place but I definitely did the mistake of going during high season. It´s almost impossible to find accommodation so I couldn´t wait to get out of there.

Went to the bus station, jumped on the wrong bus to Zagreb, and had to pay for another ticket. That´s life, travelling is a bit rusty after living under COVID for a few years.

The bus trip from Zadar to Zagreb was about 3:30 hours and cost just under 20$ (double for me because I`m an idiot).

In the bus, I chatted to my friend Chris that runs the amazing beer community Brewver. I met him at Embargo in 2019 and we had plenty of beers together. Brewver is probably the largest independent website for rating beer so it´s definitely something to check out. Chris told me that he had just arrived in Zagreb from Ljubljana so we decided to meet up. I knew he was in the region but it seemed that we would have been checking out craft beer on the opposite sides of The Balkans for several weeks.

Luckily we were both now in Zagreb so we decided to meet up at The Garden Brewery in the east part of the city. This was probably one of the largest craft beer bars I´ve ever seen. It´s a huge space with most of the drinking being done in their garden. They brew their own beer and it´s the popular Croatian burger chain Submarine Burgers that make the food.

After The Garden Brewery, we drove to a place called Ambasada. We were accompanied by a few local craft beer aficionados that wanted to show us the best places to drink craft beer in Zagreb.

Now, Ambasada is very cool. It´s actually a bottle shop with a bar, something I´ve always wanted to start myself. They specialize in Belgian lambics but they also have a decent offering of Croatian craft beer. The place is very intimate and it seems like everyone is just talking to everyone. Definitely a must for every craft beer lover traveling to Zagreb.

I mainly had beers from Nova Runda and Varionica. One memorable one was the C4 craft beer from Nova Runda. I´ve seen 4C beers before but I don´t know why I´ve never seen a beer called C4. It´s a brilliant name and very obvious when you see it. It´s also a very tasty Croatian Pale Ale.

The place closes at 10 pm, which is quite early but understandable for a bottle shop.

At this point, we were all already pretty drunk but we decided to go to a place called Valhalla. This bar is very much in the centre of Belgrade on the walking street of Ulica Pavla Radića.

It´s a cool dive-barish place that plays metal music. Heavy metal and craft beer is always a good combination which in Cambodia we have witnessed first-hand at Chug Lab.

My memory here is quite blurry, but at Valhalla, they have several taps of craft beer and I probably had them all.

The following day I ended up at a coffee shop called Quahwa. It´s a coffee roastery with a chill atmosphere and great coffee. From there I planned which other Zagreb craft beer bars I should check out.

I read that there was a street with several craft beer bars so going there was a no-brainer. The street is called Opatovina Ulica and is quite central near the hustle and bustle.

Carpe Diem is definitely not the most creative name I´ve seen in the craft beer scene.

This is more of a typical local bar. I´m not sure if they are actually brewing the beer themselves or if they are just serving beers from one specific brewery. The beers they have are from a brewery called Krizevacko and they have a pale and a dark lager plus an IPA and a wheat beer. It´s not the most exciting selection and the taste is kind of what you would expect from a typical brewpub – nothing exciting but decent beers. I have to give credit to the staff though as they were very friendly.

After Carpe Diem I continued to Craft Room which recently had changed owners. It supposedly used to be a very popular place in the Zagreb craft beer community but people hadn´t really made up their mind if they liked the change of the owner or not. After Craft Room I checked out a couple of other bars on the street but unfortunately, Tolkien´s House was closed. It was on my list of craft beer bars in Zagreb that I wanted to go to but no luck.

I ended up back in Valhalla where I had the chocolate version of Duchesse De Bourgogne and some Croatian craft beers from Pulifer and Maskeron. The Maskeron Brewery is actually from Dubrovnik and there were only a few kegs available in all of Zagreb. Dubrovnik is disconnected to the rest of Croatia which must have made it difficult for their beers to come to Zagreb during COVID. Croatians eventually built the new Pelješac Bridge so that you could transport goods from one side to the other without going through Bosnia & Herzegovina. Cool!

There were a few breweries that produced exceptionally good craft beer in Croatia. Nova Runda seems to be the most respected one by most craft beer lovers. They were definitely a standout brewery and I recommend checking them out when you have the chance.

My trip continued to Hungary after this and I will soon post an update about the Hungarian Craft Beer scene. It was actually really good.