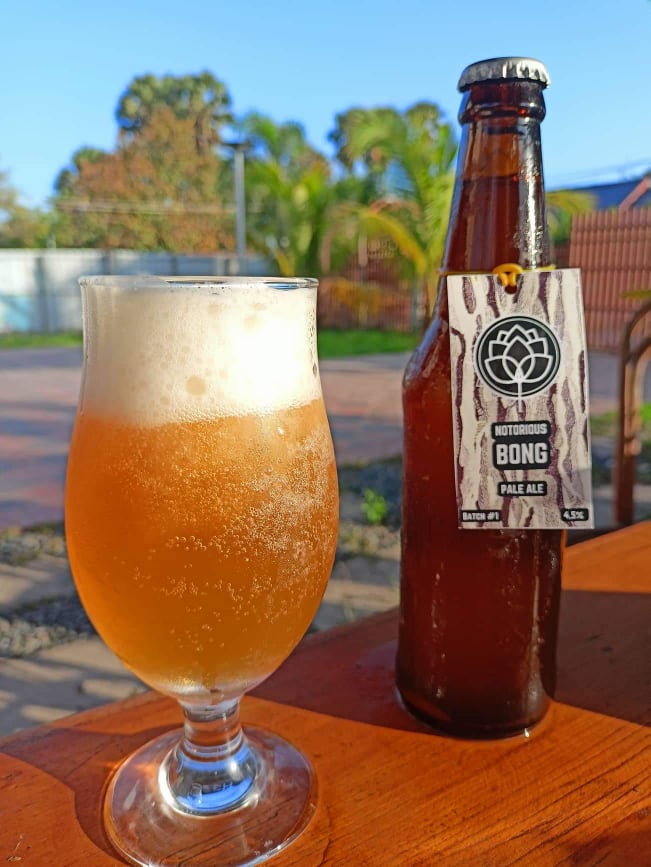 A new craft beer brewery has just sprung out of Kampot. We have earlier seen local breweries there like Flowers Nanobrewery and Projekt Brews, but now there´s a new kid on the block. Their brand was launched just a few weeks ago at the Second Kampot Craft Beer Festival. We, of course, got curious and did a little chat with one of the owners, Theo.

So, you are starting a brewery in Kampot?

Yes! We just arrived in December from Europe and started brewing just after Christmas!

Who are you guys and where did Notorious Bong suddenly appear from?

We are two French Friends Simon and Théo (We met in Cambodia a few years ago). Simon, Aka José, is linked to Kampot since he opened the Sabay Beach with our dear friend Nicolas in 2017 (shout out to the best sunset view in Cambodia in my opinion). And I am Théo, I fell in love with the Cambodian lifestyle (especially Kampot) since my first visit back in 2014! We both lived in and out between Cambodia, Australia, and France for 6-7 years and now it’s time to settle down.

Why Cambodia, and why Kampot instead of for example Phnom Penh?

As mentioned above, we already lived in Cambodia for a while and we already have two of my childhood friends, Nicolas owner of Sabay Beach and Romain owner of Voodoo Boulevard set up in Kampot. By the way, you have to try Romains magical beverages! They make things easier for us by sharing their experiences with logistics and work-life in Cambodia. And it’s always enjoyable to share a cold one with your closest friends when we have common free time (quite rare these days). We are already thinking about Phnom Penh in a near future but we’ll scale the brewery step by step.

What’s your story with brewing?

I got into craft beers when I was in Perth, Australia. Going from a VB to a double IPA was a shock, It was like god changing water to wine! I guess it’s like every craft enthusiast, once you took the path it’s already too late.

At the same time, with another close friend of mine, we were looking for some business ideas to start in Kampot or Cambodia and he had the idea to brew our own beers. So once my working visa ended in Australia, I came to Kampot to start learning everything about the brewing process.

I sent messages to most of the brewers in Cambodia to volunteer for them.

Yuki from Flowers responded almost immediately and that’s how I had my first brewing expérience!
He was a perfect “educator” and really patient with me as I was a complete noob and not familiar with the brewing language. Looking back, there are many things I kept from Yuki’s teaching, especially being rigorous with every step of the brewing process (writing down every data, every move to be able to identify potential improvements).

Something underrated in my opinion is being absolutely ruthless with hygiène and the cleaning process. He is the cleanest Brewer I have met so far. I respect Yuki a lot, I love his curiosity about new combinations of flavour.

Then I went back to my hometown (Montpellier) which has a huge craft beer scene. I did some homebrewing for my friends and participated in open brew days with local craft breweries.

And here we are now!

You might be the 5th craft brewer in Kampot which is a lot for a city the size of Kampot. Is the competition hard or are you seeing it like you´re all contributing to expanding the popularity of craft beer?

One thing about the worldwide craft beer community, and that’s something we never found in any field we work or got involved in, everybody (or maybe 99 %) is showing some benevolence and sharing tips, advice, and experiences they went through.

Harry from Projekt Brews in Kampot nicely gave us (and still give) some guidance on how to deal with local logistics. The same goes with Yuki, sharing a lot of precious knowledge etc.

In my hometown, 3 breweries décided to rent a big warehouse together, share the costs of rent, charges, deliveries, etc. and set up a taproom. That is the way I see Kampot and possibly the Cambodian craft beer community.

I know when we’re going to a craft pub, we try many styles, many breweries.

So 100% we think we would lift each other up and be a part of Cambodia’s craft beer expansion.

What is your vision with Notorious Bong‘s brand?

We are ambitious with Notorious Bong but patient. We do not want to skip any step on the way and WE want to scale up our brewery wisely.

First, it’s to introduce ourselves and build a reliable relationship with our future distributors. We are currently running a lot of test batches in Kampot to make people try our favorite recipes we brewed back home.

Also, we’re offering customized batches for the businesses desiring to have a unique beer capturing the spirit of their brand.

We want to share our love and passion for beers. There is a beer for everyone and every mood.

Any particular type of beers you will focus on and what will be the 3 first beers Notorious Bong is going to release?

As mentioned above we run a lot of test batches before the craft beer festival at Monkey Republic and check it out with the local (modified) water.

For now, we released a Double IPA (Jimmy Two Times) which seems to meet its success and we are already brewing a lot more of it.

We will have a black IPA coming soon (my favorite recipe) and we are excited to make people try.

Planning to open a taproom in Kampot?

Not in Kampot as we really want to focus on the production side of the brewery. Once everything’s going smoothly, we’ll think about opening a taproom in Cambodia.

What is something you would like to see from Cambodian Craft Beer and the brewers?

Open brew days like we used to go in France, it is really interesting to learn from experienced brewers and learn how a beer is made from grain to glass!

And many collabs hopefully

What is your favourite brewery/beer in Cambodia?

Since I came back to Cambodia :

Thank you Theo for the interview.

Keep updated with their progress on their Facebook Page.

Currently, you can find beers from Notorious Bong at Embargo in Phnom Penh. If you want their delicious craft beers in Kampot you can find them at Monkey Republic and Voodoo Boulevard.