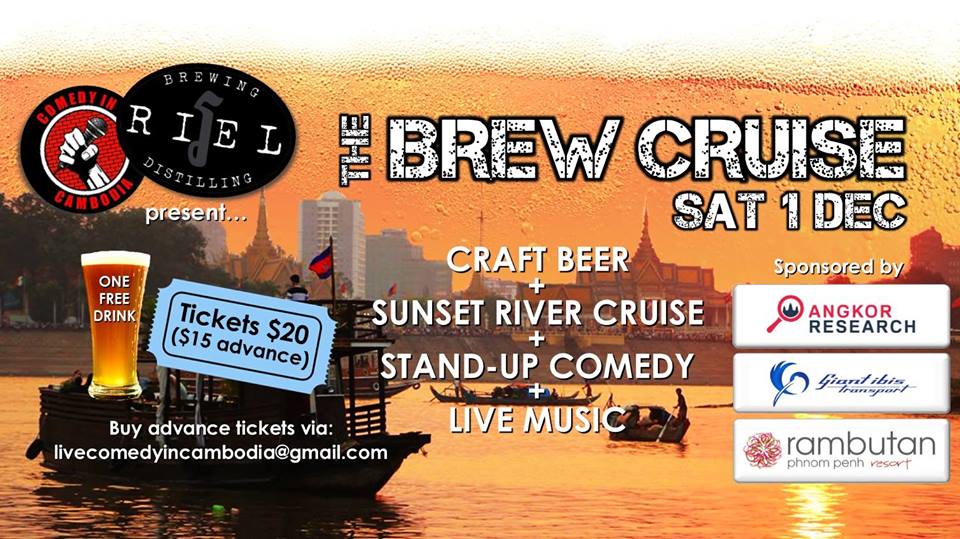 Saturday this weekend will see one of the coolest events in Phnom Penh during 2018. Riel Brewing and Comedy in Cambodia have teamed up to take lovers of comedy and Cambodian craft beer for a river cruise they won’t forget anytime soon. We’re talking about The Brew Cruise!

The boat will depart at 5pm this Saturday, 1st of December, from the Riverside, near Koh Pich. The cruise will start with some comedy from British comedian Garrett Millerick, Vietnamese comedian Vu Minh Tu, and Ben Frank, an American comedian based in Shanghai.

Following the comedy, there will be musical entertainment from the frontmen of the local band Hypnotic Fist Technique. And of course, there will be plenty of delicious Cambodian craft beers from Riel Brewing & Distilling.

Tickets are $15 in advance and $20 at the door. The price includes one craft beer, which according to the rumours, will be Riel Brewing’s Honey Blonde Ale. The Brew Cruise is sponsored by Ibis Buses, Angkor Research, and Rambutan Resort. You can book your tickets in advance by sending an e-mail to livecomedyincambodia@gmail.com, but also at Riel Brewing’s Taproom, Rambutan and 3 Mangos guesthouse.

Last Updated on September 6, 2019 by kimmo.o.hakala